Well, yesterday I was (technically) able to get Ubuntu Server hosting on Ubuntu with Nginx, but I’ve noticed significant issues with the data model being out of date when deployed and run in Release mode, as specified by the Micrsoft site. I’m not sure if this is an issue with SQLite or Microsoft’s release on Linux, but I’ll be sure to look into it in the next few days or so. Things are working perfectly in the current mode, but it’s not a state we want to be in long-term for this environment to mimic a production atmosphere.

Whilst the application isn’t pretty, I have a majority of the application done at this point - the parts leftover for tomorrow are: [ ] Assigning Participants to eachother [x] Deploying to Ubuntu (bin) [ ] Allowing the “initialization” of a Secret Santa instance

Of course, there’ll be plenty of other improvements and features, including showing Users’ addresses, as well as improving some of the UI elements: 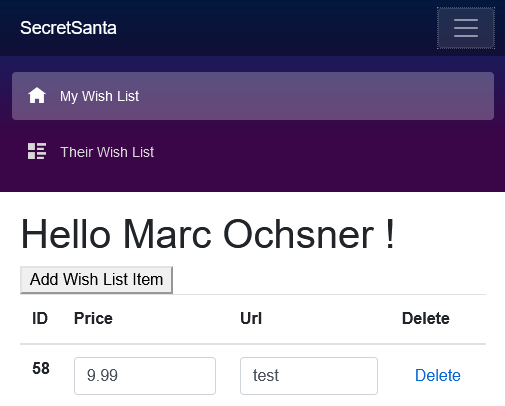