It’s the weekend, and I was super stoked to start my morning with some Jekyll updates, going to Dunkin’ with Ann-Marie, and DevFestWi! 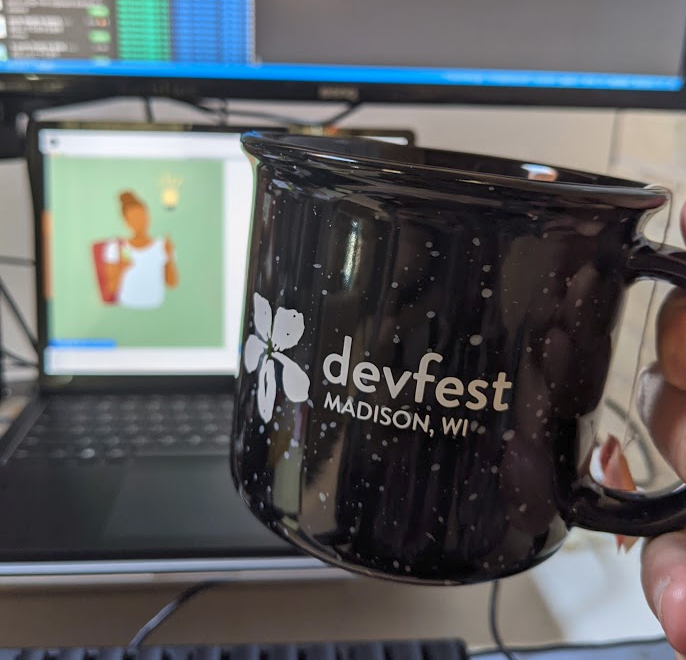 At DevFest, the first talk was about Imposter’s Syndrome, by @meliss_houghton. Melissa spoke about Imposters syndrome, which I’ve definitely felt like I had in my previous role in Systems Engineering, as I was put in more of leadership roles towards the end of my 2 years at Epic, as well as in my personal life.

In particular, I sometimes feel like an imposter in social settings, or more specifically, on social media where I’m connected with so many folks who knew me in grade school or college. I’ve recently started using Facebook again as a way to connect with people I was once close with, and I think identifying with those people just makes me think back to my grade school, or even early college days, when I was pretty clueless about life. I was nowhere near the stage of adulthood at that point, yet there’s been so much that’s gone right in my life in the last 3 years that has led me to be where I am, married and excited to start a family.

Another talk that really resonated with me today was by Karthin Rohrmeier, who presented on why language matters. There was a lot that may have been common knowledge to some of the more conscientious folks, but there were specific parts brought up that some of us more priveleged, and over-represented groups of individuals might not think about as much. We all say things, using language that we’ve picked up growing up, that have implications and meaning, and those specific words, and ways they’re said, clearly affect people. By speaking, we bind ourselves to those words, and the hearer binds those words to us as well.

“Culture is nothing more than the set of behaviors that are rewards and punished.”

Wanting to help shape a positive future for the marginalized, I hope to play a part in that culture to help punish poor language, and encourage positive language and discourse. Language is power, so we should use it.

During today’s talks, I’ve looked at the best ways to link out to hook up to development Twitter, so that any links I upload will have some sort of traceability. I got the idea from Melissa’s website, which seems to do something similar using ?ref_url querystrings at the end of any twitter links. It looks fairly easy to embed tweets as well, so I may look at the idea of doing something like that down the road. Overall, I didn’t get to actually implementing anything, but I’m definitely going to start using something like this over the next few days.

There may be a variety of other things I want to add in as well, so there may be an update to this post later tonight!